By Luis Cuesta for www.desolysombra.com

July 6th – Evening Vespers, A religious service is held on the evening of Jul 6th which is attended by the entire city council at the church of San Lorenzo which proudly holds relics of Pamplona´s patron saint, San Fermin. Vespers are sung by local choir & recordings go back to 15th century. 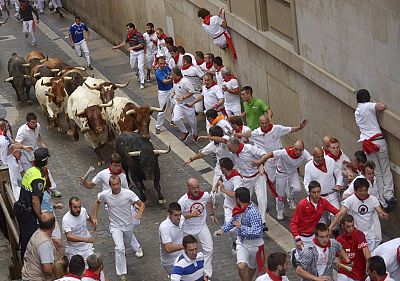 July 7th -16st Bullrun/Encierro, At 7 a.m. the 1st bullrun takes place on July 7th streets adjoining the route of the running of the bulls are closed off in preparation for the 8 a.m. Bullrun. This day is always very dangerous as it attracts the most runners traditionally. We advise to be in your running position by 7 a.m. as streets get closed off!!

July 7th – 10:30 a.m. – Riau Riau At 10:30 am on July 7th, the effigy of San Fermin is carried from the church of San Lorenzo & is followed by a procession of the city council dressed in ceremonial regalia, clergy including the bishop of Pamplona & the locals.

July 6th-13th – Encierillo at Night, the bulls are moved from the large corrals accross the river up to the corral at Santo Domingo for the morning´s encierro. Spectators are limited by the City Council & must have a security pass. The Encierillo is signaled by the blowing of a ram´s horn. The only persons in the street are the pastors & herders who work with the bulls. Onlookers observe from the high walls in total silence, anyone making noise or using flash camera would be considered to be distracting the bulls & most likely find themselves in jail with a hefty fined.

July 6th-14th – 9:30 a.m. – Gigantes, Daily the City Giants take to the streets of Pamplona. 8 giants, 4-5 metres in height & first designed by Navarra artist, Tadeo Amorena around 1850´s. they represent the mythical queens & kings of Europe, Africa, America & Asia. The Gigantes dance through the streets of pamplona & are extremely popular with the young children.

July 7th-14th – 7:30 p.m. -Merienda in Bullring, A light late afternoon meal eaten all year round but during sanfermines it is typical to “meriendar” in the Plaza de Toros (bullring) at 7.30 pm after the 3rd of 6 bullfights & washed down with gallons of sangria & kalimotcho.

July 8th-14th – 3:00 a.m. – “Caldo Soup” A light consume which is very popular with the bullrunners who have stayed up all night! beware…they start serving at 3 a.m. 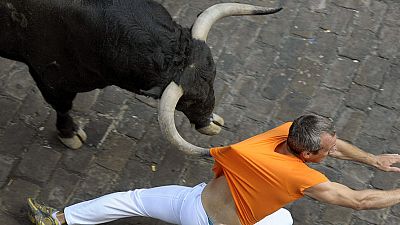 July 14 – Closing Ceremony- “Pobre de Mí” A beautiful candlelight closing ceremony held at the Plaza Consistorial on july 14th. At the stroke of midnight, a rocket is fired to mark the closing of the fiesta & this is when the pañuelo is removed.